If Liberty Media gives you the Halo, you got to brand it! 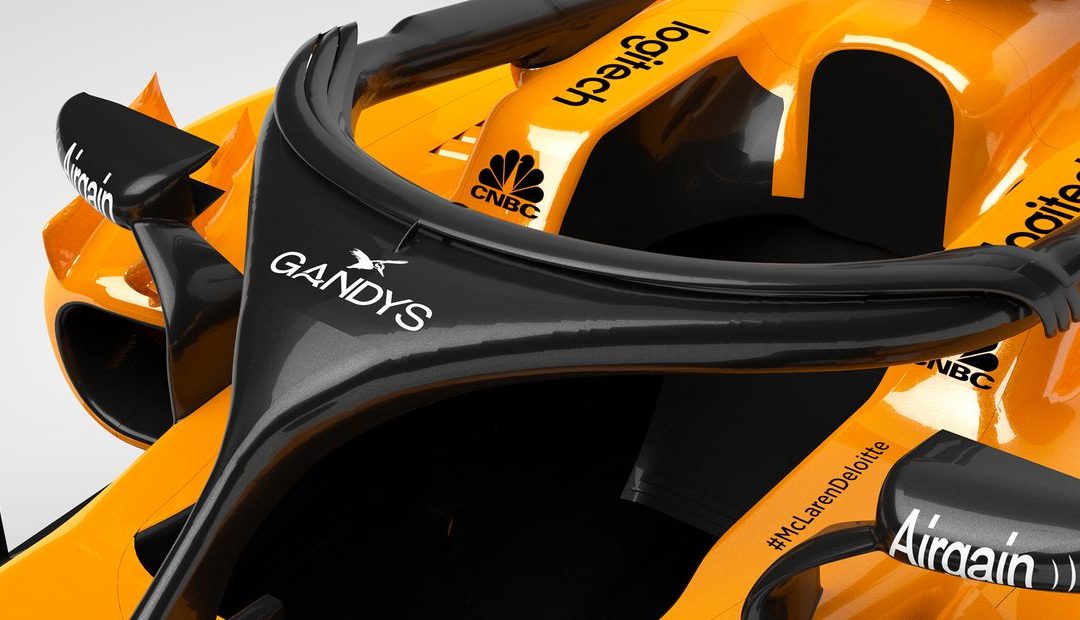 The Formula 1 season 2018 started last week in Australia and it’s enough to note that the Halo could be used as a billboard.

The Halo, the new structure that stands over drivers’ heads, debuted in Australia during the last Grand Prix won by Sebastian Vettel. Did you note that? Yes, it’s only a huge and aesthetically horrible billboard.

Ok, the video that demonstrates its utility is pretty shocking, but it works only in case of a flying huge object: Nicky Lauda correctly said that “the Halo destroys the DNA of an F1 car. The FIA has made F1 as safe as it gets. Also the danger of flying wheels is largely eliminated, because the wheels are always more firmly attached. The risk to the drivers has become minimal”. For instance if a situation similar to the one occurred in 2009 to Felipe Massa would happen once again, the driver will get hurt despite the Halo. That’s the point: is it really useful as they affirm?

The three-times World Champion continued: “we are trying hard with faster cars and getting closer to the spectators to attract new fans to the sport. But this now is destroyed by an overreaction”.

Sources say nine out of 10 teams voted against the Halo, but the FIA decided to adopt it.

Force India technical director Andrew Green said the halo created “huge” extra costs for his Formula 1 team, because it meant that the 2017 chassis is no longer usable. The extra work required to mount the FIA-mandated safety device for 2018 meant designing a new chassis and spending “in the hundreds of thousands if not million-dollar mark to put that halo on the car”.

So, how to recover the money spent to develop the new chassis that hosts the Halo? Let’s brand it!

The Halo represents a new area for sponsors and teams immediately understood it. Just think to the media coverage that it’s able to ensure to sponsors: consider Wheichai that appears on Ferrari’s Halo. If a 30-second TV spot costs more or less 0.15 € / spectator, how much they would have spent to have the same exposure considering the number of Formula 1’s spectators?

The Halo looks like a flip-flop and flip-flop manufacturers didn’t waste time to get the most of it! Before the #AusGP McLaren announced a new partnership with Gandys, a British lifestyle brand. Gandys produced a special McLaren-inspired flip-flop, renamed “halo edition” by the team, with 100% of profits going to the Orphans For Orphans foundation. McLaren’s chief marketing officer John Allert said the placement of the logo on the halo was “not only perfect from a branding perspective, but also a great opportunity to underline Gandys’ charitable commitment to providing a safer, more protective environment for those at risk”.

A week later Force India signed a season-long deal with major flip-flop manufacturer Havaianas to sponsor its Halo. Otmar Szafnauer, COO of Force India said: “We are delighted to bring Havaianas into Formula 1. Where better than the halo to carry the famous Havaianas logo? We have always been an adventurous team with our marketing efforts, and after introducing the pink livery in 2017 we hope this partnership will appeal to all fun-loving Formula 1 fans in 2018”.

Marcio Utsch, CEO of Alpargatas, said: “At Havaianas, we pride ourselves on listening to the fans of our brand and over the last few months we have seen more and more people associating our flips-flops with the new halo across social media. Together with Force India we have come up with an eye-catching design on the car’s halo, which was the logical place to locate our flip-flop strap.”

Look at the Halo, does it look like a bikini? Who knows, maybe in the future….